Controlling Spins in Quantum systems in an Online Setting

Semiconducting spin qubits have small sizes and incredible operation speeds, but using them for large-scale fault-tolerant applications has so far been prevented by material noise limiting qubit coherence and decreasing gate fidelity. However, their strong sensitivity to electric fields can be profited from if a sufficiently large number of gate voltages can be adjusted accurately (low-frequency control) and tuned quickly (high-frequency control) to cancel noise. By integrating low-noise control electronics with on-hardware real-time signal generation as well as fast qubit readout, and applying the resulting control pulses to multi-channel state-of-the-art spin-qubit processors, we will for the first time perform conditional quantum logic in which the control feedback happens faster than the coherence times associated with the qubits. Since online qubit control is a crucial ingredient of quantum error correction in fault-tolerant architectures, our breakthrough will be an important stepping stone toward successful scaling up of spin-qubit quantum information processors. To achieve such online quantum control with high fidelities, we take advantage of the unique specializations of the ConSpiQuOS partners. Through the development of tailored quantum algorithms, their implementation on acquisition and control hardware, and the fabrication of a quantum-classical interface, will allow us to employ the readily available spin-qubit devices as small scale quantum processors. 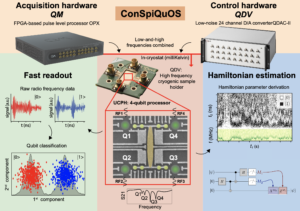