The recent breakthrough results, established within this consortium, discovered the possibility of near-deterministic generation of solid-state-qubits, NV centres in diamond, placed at a distance of about 20 nm allowing for high-fidelity two-qubit gates based on magnetic dipole-dipole coupling. Also nuclear spins can be precisely controlled with the two gate fidelity of 99.95. The method of electrical readout of the spin discovered by the consortium members, allows for individual spin qubit readout, dealing with the major constrain of the diamond quantum hardware scalability. MAESTRO proposes a novel approach to develop solid-state qubit architectures for working at ambient conditions, which become available based on the aforementioned ground-breaking work, that will be used as a basis for scaling up, providing a compelling path towards industrially interesting medium scale quantum systems. The central aim of the proposal is to tackle the bottle neck issues of our technology for diamond processor hardware scalability, e.g., the deterministic engineering and fabrication of NV qubits with a high fabrication yield that will allow then to scale our technology to industrially relevant processes and also further improve the gate fidelity. Together with the selective electric qubit readout, applied to an entangled qubit network in a nanoscale device, MAESTRO will provide a quantum processor platform that can be further developed, in future, towards marketable industrial applications. 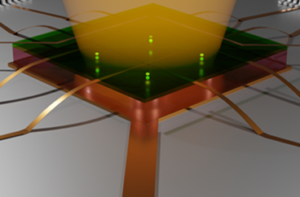