Collaborative genomic medicine is on the verge to bring major advances to medical research and health care services. However, it also raises major ethical concerns if privacy is not strictly assured. By exploring the laws of quantum mechanics, a generic and broadly available secure multiparty computation (SMC) framework, targeting genomic medicine applications, is going to be carried out. The developed quantum SMC framework will provide unprecedented levels of security, without compromising the efficiency and availability of the system. As a proof-of-concept, a private data mining genomic medicine service, based on quantum SMC, will be implemented in the laboratory and validated in a field trial. In QuantaGENOMICS, we will prove that quantum technologies can play a major role in solving the conflict between privacy and utility of collecting and mining huge quantities of individuals’ data.

To construct this quantum SMC framework, a practical secure random oblivious transfer protocol based on classical and quantum cryptographic primitives is going to be developed, implemented, and validated. The obtained random oblivious transfer protocol will be practically secure, even in the presence of a quantum computer. Several quantum resources, namely single-photon, coherent and entangled quantum states, are going to be used together with classical cryptographic resources to ensure that the system offers the desired level of security, without hampering its efficiency or availability. Based on this hybrid random oblivious transfer protocol, a generic, fast, and secure SMC framework will be achieved. On top of the quantum SMC framework, a collaborative genomic medicine service is going to be implemented. The obtained quantum resources and cryptographic protocols will be integrated into a big software-defined quantum optical network. A field trial will demonstrate that the developed quantum technologies and services can be integrated into deployed telecommunication infrastructures.

By combining new protocols in a groundbreaking way, QuantaGENOMICS will explore known quantum effects and concepts from quantum science and translate them to the development of radically new technological applications in quantum SMC, fostering the development of goundbreaking genomic-based clinical services, in which privacy is assured by quantum technologies. By enabling a disruption on the medical practice, by fostering its hyper-personalization, such services will demonstrate the huge positive impact on society of the developed quantum technologies and promote the rise of novel quantum-based applications. 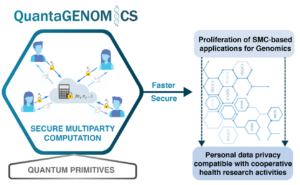 Figure: The major goal of the QuantaGENOMICS is to establish a firm ground for secure and fast multiparty computation, allowing its proliferation in genomic medicine field.