Electron spin qubits in silicon form a serious contender for the realization of a large-scale solid-state quantum computer. Solid-state realizations are considered scalable in general, but silicon spin qubits stand out due to their extremely long coherence times, compatibility with reliable and reproducible industrial fabrication techniques and the feasibility to integrate classical electronics.

Universal electron spin manipulation with excellent fidelities was demonstrated in this system. However, a key challenge for true scalability of silicon quantum computer architectures remains the realization of a coherent link between separated quantum registers on a chip. Such a link would serve two important functions. First, it enables a modular structure that allows expanding the number of qubits beyond the limits of local registers. Second, coherent links between registers create space for classical control circuits to be integrated with the qubits on-chip.

We aim at the demonstration of a fault-tolerant quantum bus (QuBus) that coherently transfers a single electron with an arbitrary spin qubit state between quantum dots separated by 1 to 10 microns. The quantum dots (QDs) will be electrostatically defined in Si/SiGe heterostructures and silicon-on-insulator (SOI) nanostructures – two very promising systems that we will fabricate in cooperation with industry. We shuttle the electron using an array of electrostatic gates following two strategies: (I) An electron spin conveyer i.e. a potential minimum that smoothly moves laterally. (II) An electron spin bucket brigade, i.e. the electron is passed through a series of QDs via adiabatic passage. In both cases, the final goal is a 1 to 10 micron long QuBus, which is controlled by a maximum of four time-dependent voltage inputs. We will compare the different approaches both experimentally and theoretically by modelling the effects of electrical disorder in the heterostructures, including valley splitting variations, g-factor variations and effects of phonons and electrical noise. Experimentally, the problem of qubit shuttling is separated into three intermediate steps: (I) Reliable charge transfer. (II) Reliable transfer of the spin projection (III) High-fidelity transfer of arbitrary spin states. To enable true networks, we will also demonstrate a QuBus that forms branches and investigate the benefits for fault-tolerance. As a benchmark for the coherent and integrated operation of the QuBus, we will use it to distribute an EPR pair and to realize the first probabilistic quantum teleportation performed in silicon. These advances will pave the way to scalable, topologically protected circuits of electron spin qubits in quantum dots. 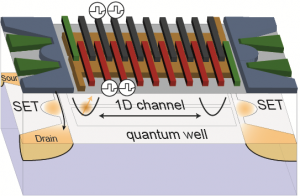 Schematic of a QuBus. A quantum dot is formed within a Si quantum well by multi-layer metallic surface gates. Pulsing the voltages to these gates the quantum dot, which carries a single electron, is shuttled across an electrostatically formed one-dimensional channel. Single electron transistors (SET) can detect a single electron and its spin state at the ends of the QuBus.

MID-TERM REPORTING: Presentation of the mid-term results of the project