The quantization of Hall plateaus at integer and non-integer, and yet at certain fractional multiples of e2/h with unprecedented precision, is an intriguing phenomenon, which occurs in the two-dimensional electron systems in the presence of a high magnetic field at low temperatures. This fractional quantum Hall (FQH) state is one of the most celebrated phenomena in many-body physics, observed in different materials irrespective of their characteristics, impurities, geometrical configuration, and electron densities, indicating the topological origin of this quantization.

The quantum topology of FQH matter manifests itself in the unusual quasiparticle exchange statistics, with neither Fermionic nor Bosonic character. Such exotic particles are called anyons and further classified as Abelian or non-Abelian. The wave function of Abelian anyons may acquire an arbitrary phase after moving one particle around another one on the plane. Even more remarkable, the exchange of non-Abelian anyons will not just alter the phase of their wave functions but change the ground state of the whole system as well. This unique property of non-Abelian anyons may offer a possible route for designing quantum devices with topological protection against decoherence.

TOBITS project will address the most promising way to demonstrate non-Abelian quantum statistics, namely the construction of an interferometer for braiding the quasiparticles. Graphene is a very attractive platform for anyonic physics because of its amenability to external control parameters, which will be investigated and utilized by TOBITS consortium in its development work.

In the spirit of designer non-Abelian states, TOBITS collaboration will create topological defects in the quantum Hall bilayer by applying appropriate gate and lattice engineering schemes. These designer non-Abelian states will be characterized using inter-layer tunneling transport and current-current correlation measurement. Furthermore, the experiment and theoretical settings realized during this consortium work can be extended to develop the ultimate platform for topological quantum computing based on fractional Chern Insulators. In conventional 2-DEG of GaAs/AlGaAs heterostructures, we will study non-Abelian topological order via quantum heat transport measurements. Altogether TOBITS collaboration will work on fundamental aspects of anyonic quantum technologies, which paves the way towards the future realization of non-Abelian quantum computation. 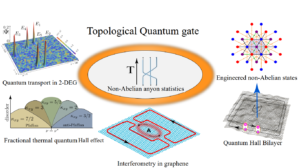